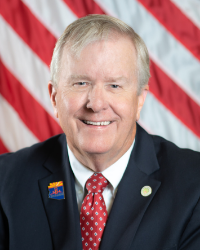 Tom Schoaf, elected Mayor of Litchfield Park in the spring of 2006, moved to Litchfield Park in July 1980 when he became President of a local manufacturing business headquartered in Goodyear. He and his wife, Shirley, brought their three children from South Bend, Indiana and chose to establish their roots in a wonderful, tight-knit community; known then simply as “the Park.” At that time, Litchfield Park was a small, one square mile oasis surrounded by endless desert scenery and farmland; it featured excellent schools, a community atmosphere, and was anchored by the Wigwam Resort and Country Club. The Schoaf Family continues to reside in the area and the extended family now includes six grandchildren.

Mr. Schoaf has been involved in a variety of business endeavors, both local and international, that have taken him around the world from Singapore to Germany. Even with a busy schedule, he remained active in various community groups including the Litchfield Park Youth Association, Little League and AYSO soccer. He served on the Litchfield Elementary Governing Board and the original Litchfield Park City Council. Today, in addition to serving as the City's Mayor, he serves on the Maricopa Association of Governments (MAG) Economic Development Committee, and serves on various boards and councils including: Executive Committee, Arizona League of Cities and Towns; Trustee, Abrazo Hospital West Campus; President’s Council of Estrella Mountain Community College; and, Luke West Valley Council.