Ann and her husband John along with their children Molly (27) and Jack (24) moved to Litchfield Park from Bellevue, WA in 1993. 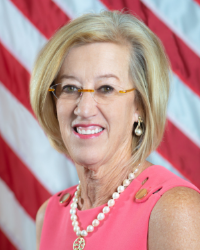 Ann worked for 2 years in the non-profit sector as a Health Educator for the Diabetes Association in Phoenix and then spent 10 years in marketing and sales with LifeScan Inc. a medical device company and division of Johnson & Johnson. After 18 years as a domestic engineer, in 2011 she returned to work joining the Litchfield Elementary School District (LESD) staff as the Public Information Officer (PIO) and Community Liaison. She retired from LESD in May of 2016.

It was not long after arriving in Litchfield Park that Ann chose to stay home with her young children and quickly realized she needed to become involved in this charming community. She began her career as a “professional volunteer” joining the Litchfield Park Library Guild in 1994. She continued to build her volunteer resume at the Wigwam Resort, St. Thomas Aquinas Catholic Community and the Litchfield Elementary and Agua Fria High School Districts.

Ann’s pledge to this vibrant community is to act as a liaison for our citizens. This is an exciting time in our city’s 100-year history and she believes that the quaint village feel, historical value and unique design of Litchfield Park will be preserved as the city moves forward with development.